To Kiva’s global community of citizen lenders, translators, interns, Kiva Fellows, volunteers, microfinance lending partners and strategic partners: Ubuntu… we are because you are. Thank you.

You have harnessed the power of your voices,  your influence, your resources, and the breadth and depth of your talents in ways that have been seminal for Kiva. You backed Kiva during our formative years and have been with us every step of the way since. This has allowed us to back entrepreneurs in the nascent stages of their own businesses. A poignant reminder that the invisible hand shaping all of our lives is held by those who give us a hand up in crucial moments. This virtuous cycle of humanity is propelled by a self evident truth that the power of one fuels the transformative power of many. 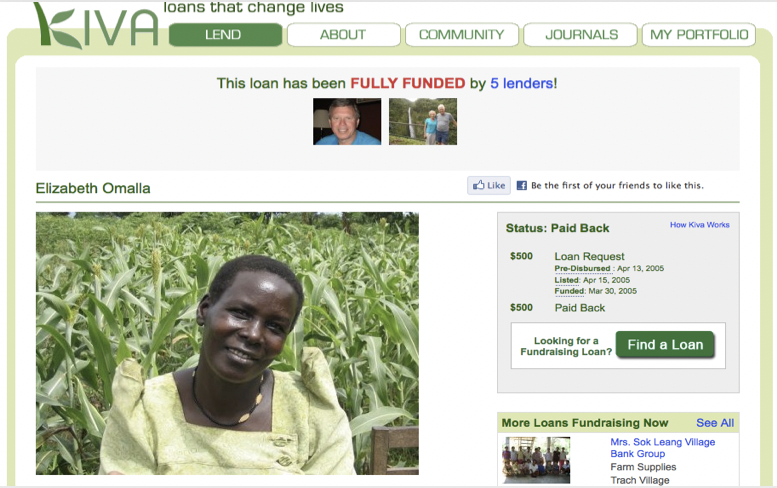 In 2005, Kiva made its first loan to Elizabeth Omalla, a Ugandan fishmonger and widowed mother of 5. Less than one year later, Elizabeth had scaled her business and increased profits enough to send her children to school, while repaying her loan. Elizabeth’s photo and the story of her business was posted online. This simple act made the invisible, visible and gave birth to the world’s first crowdfunded lending marketplace, which is why I think of Elizabeth as the godmother of crowdfunding. Crowdfunding is commonplace today. However, at the time, the idea that people would crowdsource small amounts of money, that this money would reach strangers a world away, that these small loans could make a meaningful difference in someone’s life, that those strangers would actually repay their loans …well, it all seems terribly idealistic and highly improbable. And even if it worked on occasion, it certainly couldn’t scale.

This is what happened along the way.

Today, 2 million citizen lenders across 180 countries have made $1.5 billion dignity-building loans to nearly 4 million underserved micro-entrepreneurs living in every corner of the world, including here in the U.S. 96% of those loans have been repaid in full, flipping the conventional wisdom about risk and creditworthiness on its head.

80% of Kiva’s borrowers are women, which means over $1 billion has gone to funding female entrepreneurs. Women like Elizabeth Omalla. Women like the Cambodian sewing co-op rescued from human trafficking, rebuilding their lives one sewing machine at a time. Women like Teresa Goines, a former corrections officer who started a youth-run supper club in San Francisco, all because she wanted to give former gang members and at-risk kids who had tangled with the law a fair shot and a second chance. Women like Dima, a Syrian refugee, whose loan became a lifeline for her son. And men like Erastus Kimani, a 73 year old Kenyan retired school teacher, who became an entrepreneur because he has dreams of sending his six daughters not just to school, but to college.

What a difference 15 years makes.

Many things have changed over 15 years, and yet, one enduring truth remains… that dreams and talent are universal, but opportunity is not. As Executive Chairwoman of Kiva for 12 of these years, as President Obama’s Ambassador for Global Entrepreneurship, as a Coptic Egyptian, as a refugee of war, as an American immigrant, I have lived and witnessed the hope and dignity that is restored, and the human potential that is unlocked when we gain fair access. Especially fair access to capital.

You, our partners and global community, helped pioneer a global movement, a grassroots, bottom up world’s bank that is for and by the people, that is democratizing access to capital in a radically decentralized and crucially equitable way. This is a game changer for the world’s unbanked. To become visible – to save, to borrow. To contribute their maximum to their families, to their communities – and ultimately, to the wellbeing of their countries.

One dream can transform a million, even a billion, realities. It’s all that ever has. Your collective generosity and compassion has empowered millions of people to realize their entrepreneurial dreams. You are also helping Kiva realize its own entrepreneurial dream of a financially inclusive world for ALL. In a world where nearly 2 billion people are unbanked, including 55 million here in the United States, our work has just begun. In a world where women’s hands do 66% of the work and grow 50% of our food, but earn only 10% of the income and own just 1% of the land, our work has just begun.

What we have achieved together in these 15 years gives me great confidence that we can create this future in our lifetime. You have been the fuel and foundation from which we have drawn great strength, resources and learning, making us a far better, more impactful organization.

You are the embodiment of our namesake, Kiva, which means ‘unity’ in Swahili. Quite simply, Kiva would not have happened without you. Ubuntu: we are because you are.

With profound gratitude and in service, 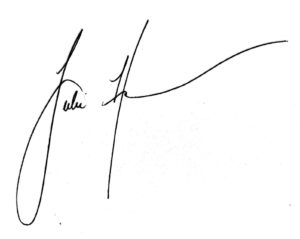 This website uses cookies to improve your experience while you navigate through the website. Out of these cookies, the cookies that are categorized as necessary are stored on your browser as they are essential for the working of basic functionalities of the website. We also use third-party cookies that help us analyze and understand how you use this website. These cookies will be stored in your browser only with your consent. You also have the option to opt-out of these cookies. But opting out of some of these cookies may have an effect on your browsing experience.
Necessary Always Enabled
Necessary cookies are absolutely essential for the website to function properly. This category only includes cookies that ensures basic functionalities and security features of the website. These cookies do not store any personal information.
Functional
Functional cookies help to perform certain functionalities like sharing the content of the website on social media platforms, collect feedbacks, and other third-party features.
Performance
Performance cookies are used to understand and analyze the key performance indexes of the website which helps in delivering a better user experience for the visitors.
Analytics
Analytical cookies are used to understand how visitors interact with the website. These cookies help provide information on metrics the number of visitors, bounce rate, traffic source, etc.
Advertisement
Advertisement cookies are used to provide visitors with relevant ads and marketing campaigns. These cookies track visitors across websites and collect information to provide customized ads.
Others
Other uncategorized cookies are those that are being analyzed and have not been classified into a category as yet.
SAVE & ACCEPT